It is usually difficult to get critiques with insightful criticism from people.  Is it because they...

don't want to hurt feelings (Yes, I can be crushed by comments.),
don't know the writer/illustrator well enough for trust to have developed,
are unfamiliar with the type of writing/illustration you have produced, or
aren't confident enough in themselves as critics?

When I'm in critique groups, I try to be gentle, BUT I want to be honest.   I think we all want that.  We want to know if our writing is fluent, clear, visual, free of redundant words, and evokes emotion.

Illustrators also have issues they want resolved.  They want their illustrations to draw out emotion from the viewer.  Does the viewer understand what is happening through the actions of the characters, the setting, the texture and color of the medium, the composition of the objects.  Is the message (or illustrator's intent) clear?  Does everything fit in neatly with the story?

This week, I was pleased with my husband's critique of my illustrations.  He gave me insightful criticism.   Was he right?  I asked myself.   I had something to think about.

Below is the illustration. It is from the story, baby spider. : 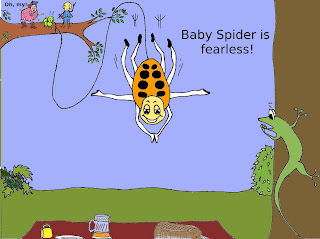 He asked why Baby Spider was so big.  He was bigger than the lizard which was in the foreground.  If he's little, shouldn't he be really small?  After some though, I took the illustration and began reworking it.  This is no easy task for someone who is just beginning to explore graphic illustration.﻿ 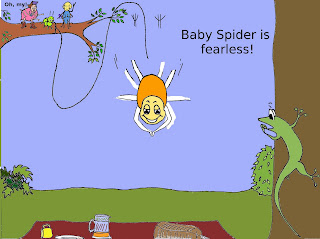 As I try to improve on my illustration, I wonder how do I focus the viewer's attention on Baby Spider if the lizard becomes the largest character? Putting the main character in the center and using action  strokes to show movement is a start.  Also, the bright color of the spider and blah color of the lizard helps draw the viewers eye to Baby Spider.

Now, what size should Baby Spider be?  To me, he's small enough in the picture below.  He should be about the height of a 5 year old child.  Critics am I wrong?  Do you have any advice for me? Seriously, please help! 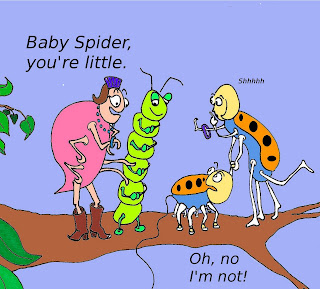 Posted by Brenda Harris at 5:32 AM